Midhurst Common is one of over 7,000 Commons in England which in total cover over one million acres. (Midhurst Common covers and area of 149.5 acres (60.5ha). These areas of land are a legacy from the past when commoners worked the land for their day to day survival. Usually commons were areas of land which were not considered of great value. It is suggested that at one time Midhurst Common stretched from South Pond, but by 1550, as shown on the map, the boundaries were more defined and have remained so. 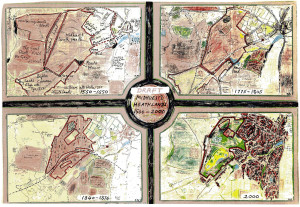 On the adjacent map, Murray Marr has plotted the change in vegetation between 1550 to the year 2002. You will notice that the actual boundary of the Common hasn’t changed a great deal. However, in an earlier map, New Pond, in what is now Pitsham Lane, and an area of land to the South of Bepton Road from New Road along to the allotment area, is shown as once being part of Midhurst Common.

Searches reveal that New Pond (pictured here) was originally created by damming the stream which forms the parish boundary and feeds Midhurst South Pond. No specific records could be found as to when New Pond was created. A Cowdray Estate map of the 1700’s shows the area as a peat moore. However, an 1808 draft of the 1st edition of the Ordnance Survey map does show the 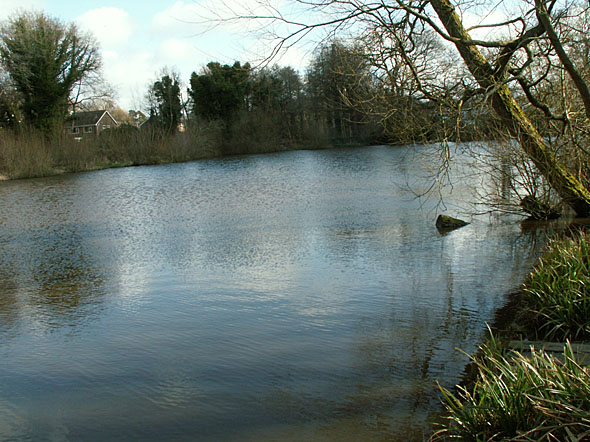 pond. There is speculation as to why the pond was created, but a letter of February 1786 from 7th Viscount Montague to his agent at Cowdray reveals the existence of fish farming and the Viscounts keen interest, so this gives rise to the idea that the pond may have been used as a hatchery and reservoir of clean water. The site of New Pond was formerly known as The Peate Moore. The pond is now run and cared for by Rother Fishing Club.

Midhurst Common is bounded by Severals Road, the A272, Petersfield Road and  Bepton Road. Within this boundary is an area of land which runs parallel to Severals Road which is fenced, and a  boundary stone can be located, marking the edge of the Common land  There is also a small area of land on the south side of Bepton Road which is part of the Common, adjacent to New Pond in Pitsham lane, plus a stretch along the Petersfield Road, close to the Half Moon public house, marked by Boundary Oaks.

A few years ago, the area of land adjacent to the boundary stone was cleared of rhododendron by a Friends of Midhurst Common work party and with the help of diggers supplied by the Cowdray Estates. This was to allow the area to return to heath and wet/bog heath.  It has taken several years of regular volunteer work 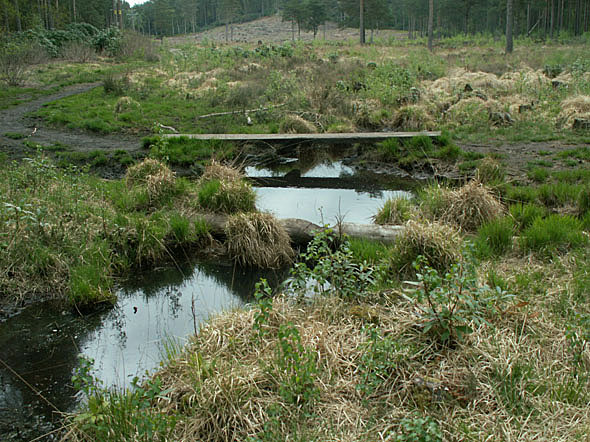 parties to re-establish the area of bog, and part of the work has  been to dam the water to create “pools”. The water is very black indicating the peat in the soil. Since this work was undertaken, more areas have been cleared under Sunset Hill, to re-establish the view across to the South Downs and to open up a wider area to return to the original heathland status. In the autumn the original cleared area is a glorious picture of purple heather.

Midhurst Common is predominantly In the ownership of the Cowdray Estates and although a registered Common and specified as heathland, or wooded heathland, is also a working woodland area. Trees are felled and the timber and either used for the Estate purposes or sold.  Unfortunately members of the public do get upset when trees are cut down, but wood constitutes an important material in the lives of everyone in some form or another. Tress are not always seen as a source of timber for use in buildings, furniture, fences, gates and other necessary uses of everyday living. However, in order to preserve an area of Heath in its many forms within this working woodland on Midhurst Common, a good relationship between the interested parties is important and continuing management is necessary.

A Potted  History of Common Land

In 1873, there was an estimated 2,633,000 acres of common or common land in England. Commons of the manorial type only existed in England and Wales. Ireland and Scotland were  not subjected to the Saxon and Norman manorial system.

Midhurst Common is one of over 7,000 Commons in England which in total cover over one million acres. These areas of land are a legacy from the past when commoners worked the land for their day to day survival. Usually commons were areas of land which were not considered of great value. Commoners had rights to either graze and/or cut turf, harvest wood and generally use the land for their day to day needs. These rights were usually attached to properties and farms

However, many of these Commoners Right were removed by the feudal system. However, some have survived, but in reality are seldom practiced.

The Feudal System was based primarily on land. In return for military service the monarch allowed powerful vassals to hold land, and sometimes to administer justice and levy taxes. In return they could “sublet” such rights. At the bottom of the system were the surfs, who worked the manor lands in return for being allowed to cultivate some land for themselves. This tied them to the lord of the manor, as they could not leave or work elsewhere without permission.

An alternative system of use for common land which is considered, is of areas of open land, which had never been subject to cultivation or agricultural improvement and which had consequently remained in their original state of nature. Ownership was never complete and absolute. These areas of land have been burdened from time immemorial with the rights of numerous adjoining owners and occupiers to turn out cattle, sheep, to dig turf, cut gorse or bracken or heather for fuel, litter or thatching. Such rights prevent normal owners from rights of inclosing common lands “waste of the manor”. These lands were survivors of a system of collective ownership. The land was owned in common, by village communities. There is an indication that there were, at one time, numerous people who owned various amounts of ground in the Midhurst Common area.

Strip Farming and the Enclosure Act. An example of how the system worked.

Land was farmed by local people in strips, alongside one another. Some people had several strips, others only had one or two strips. Some properties/peasants did not have land, but relied on grazing their animals on village common pasture land and this is how it had been for hundreds of years. But everyone helped each other at varying times of the year with gathering crops, lambing etc.

The downside was that results of harvesting were poor, due of the way seed was sown and there was seldom enough winter feed for the animals, so the beasts would be often be slaughtered at the beginning of winter.

The changes came about by the fact that Jethro Tull had noticed that seed grew much better if evenly spaced out and it was he who invented the seed drill.

Consequently changes were made In the way land was distributed, so each farmer had all his strips of land together in one place. Provided 4/5th of land owners agreed, an application was put to parliament for a special act to be passed, so that the land could be divided up and enclosed, to ensure each man’s land was all in one piece.

This is where the poorer farmers lost out, because they were left with the poor quality land, whilst the squires and friends were allocated the best areas. This is also the time when many folk lost their grazing rights as pasture land became enclosed. However, some grazing rights did survive and still exist. These are usually attached to the dwelling, rather than the owner of the dwelliing.